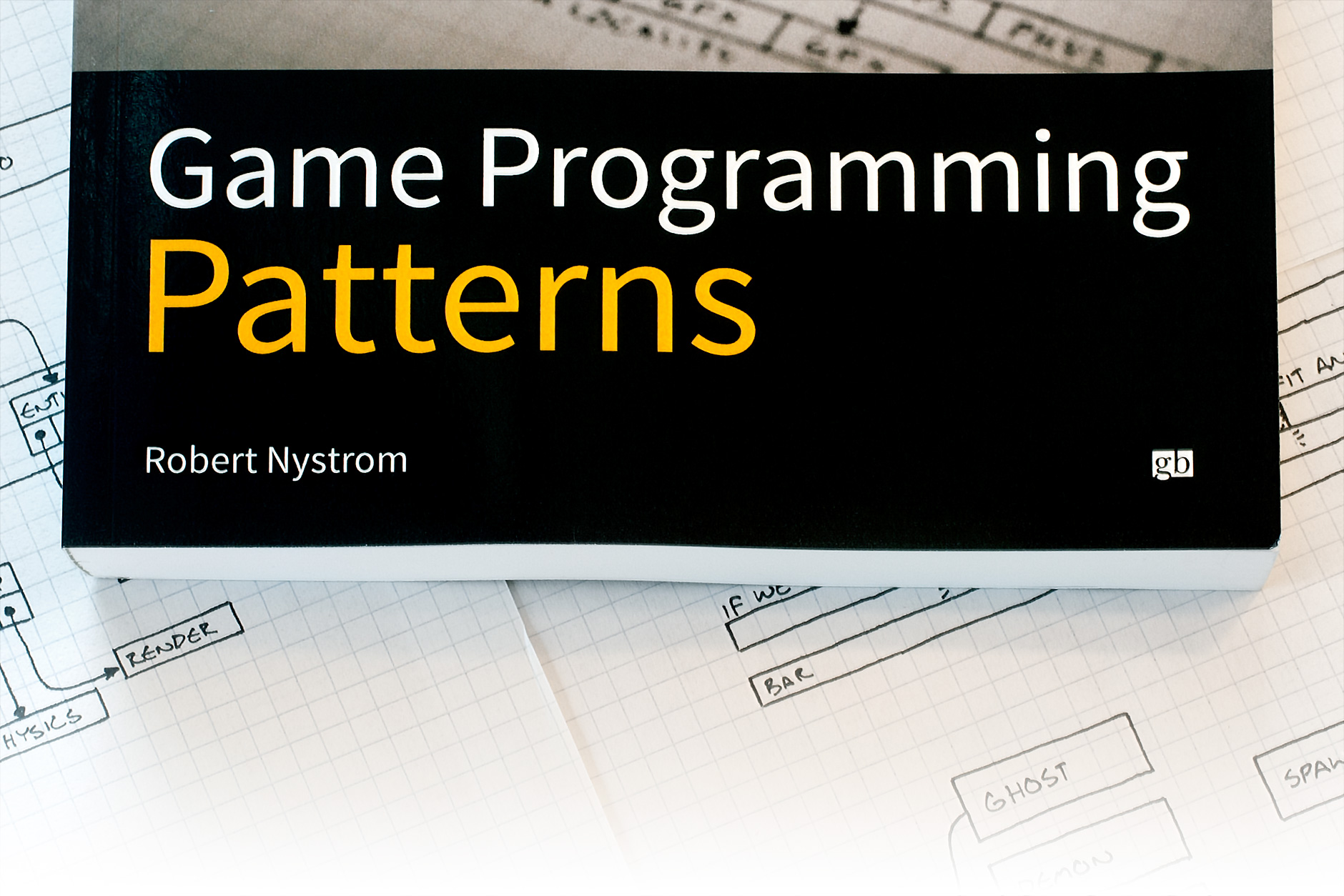 Game Programming Patterns is a game developer’s guide to the design patterns most often useful in that domain. You can read it online for free.

New takes on a few “classic” patterns described in the original book on the subject, Design Patterns: Elements of Reusable Object-Oriented Software by the “Gang of Four”: Erich Gamma, Richard Helm, Ralph Johnson, and John Vlissides.

Use sharing to support large numbers of fine-grained objects efficiently.

Define a one-to-many dependency between objects so that when one object changes state, all its dependencies are notified and updated automatically.

Specify the kinds of objects to create using a prototypical instance, and create new objects by copying this prototype.

Chapter 6: (Problems with the) Singleton Pattern

Ensure a class has one instance, and provide a global point of access to it.

Allow an object to alter its behavior when its internal state chnages. The object will appear to change its class.

Tools for dealing with the game clock, and the nature of games being broken into cycles/frames.

Cause a series of sequential operations to appear instantaneous or simultaneous.

Decouple the progression of game time from user input and processor speed.

Simulate a collection of independent objects by telling each ot process one frame of behavior at a time.

Strategies for specifying a large amount of behavior (e.g., for game entities) in a maintainable way. Bytecode and type objects focus on turning behavior into data, rather than code, while a subclass sandbox focuses on abstracting out a “tool box” of methods such that subclasses can implement their behavior with minimal coupling to the outside world.

Give behavior the flexibility of data by encoding it as instructions for a virtual machine.

Define behavior in a subclass using a set of operations provided by its base class.

Allow the flexible creation of new “classes” by creating a class, each instance of which represents a different type of object.

One of the hardest parts of programming is making your code easy to change in the future. This section focusing on decoupling parts of your codebase from each other—both in terms of static linkage and chronological ordering of events.

Allow a single entity to span multiple domains without coupling the domains to each other.

Decouple when a message or event is sent from when it is processed.

Provide a global point of access to a service without coupling users to the concrete class that implements it.

Avoid unnecessary work by deferring ig until the result is needed.

Improve performance and memory use by reusing objects from a fixed pool instead of allocating and freeing them individually.

Efficiently locate objects by storing them in a data structure organized by their positions.